Warning: Declaration of kiddy_Walker_Nav_Menu::walk($items, $depth) should be compatible with Walker::walk($elements, $max_depth, ...$args) in /home/lehad/public_html/wp-content/themes/kiddy/functions.php on line 0

Milestones in a baby’s development 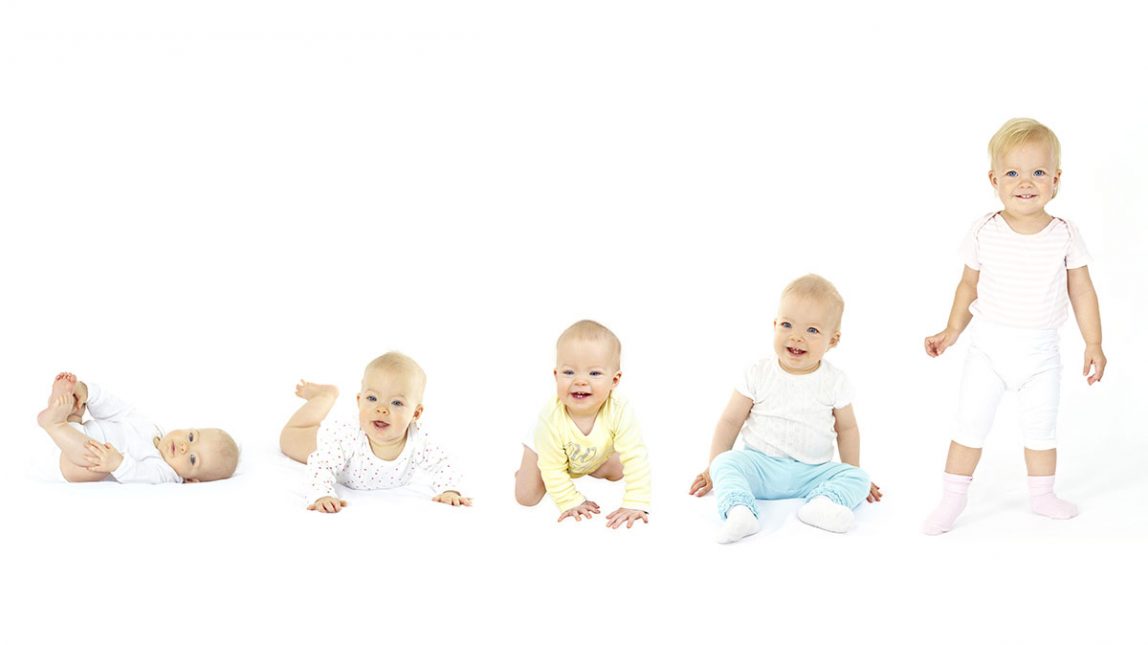 Your baby’s development in the first two years of life is truly remarkable. It is amazing how much they can actually understand and observe even though they may struggle to communicate back to you. Let’s take a look at some of the fascinating stages and milestones of their development.

Can distinguish the smell of your milk from another mother
Unable to focus their sight, thus everything appears hazy unless it is within 8-10 inches from them
Can distinguish and identify different sounds and voices including the different tones of males and females, but won’t be able to determine the direction the noise comes from
Touch is very important for a newborn to learn about their new surroundings, however initially for the first few months they will only seek comfort, having come from a warm, fluid-filled environment. The warmth and softness of blankets, hugs and kisses help soothe your baby and ease this transition so they can adapt with time. This is where the baby will develop a loving connection with their parents, the providers of comfort.

Will start to recognize the outlines of faces (which babies find fascinating)
Tracking objects visually through 180° (they will enjoy the hanging mobile over the crib)
Hands will begin to open, may start reaching out for objects
Head can lift up to 45° (when lying on their tummy)
Starts kicking legs

Will begin grasping objects. At this stage they become aware of their hands and their eyes become fixated with them, this is the beginning of hand-eye coordination
Babbling may begin and they might amuse themselves with noises. Learning to talk is reliant on their hearing. The more you talk to them face to face, the easier they will find it to eventually speak
By 4 months, they will be close to lifting their head up 90°
Starts to distinguish colours. They will enjoy colourful toys and wallpaper, but more so, they enjoy the contrast of colours eg. yellow with black rather than orange with red. At this stage, spend time with them looking through colourful books

Teething may begin this month
Once grasping objects, they will start to explore putting things in their mouth
They will begin experimenting with cause and effect
Hands used in a raking action to bring toys closer. The hand-eye fixation will cease
Head becomes steadier for longer periods
Will start to exercise their sense of touch. Let them play with a variety of textures (rough, soft, fuzzy, smooth etc.). Don’t forget they still value the gentle caress from parents to feel safe and loved

Can now hear softer sounds from an arm’s length away
Babbling will increase and vary, double syllable sounds are made
Will understand emotions by the tone of voices, as well as identifying accents and when people are not speaking in their native tongue
Able to sit with support, may be able to roll on to their back from their tummy
Vision has extended to see across the room. Being outside and going for a walk (in a pram) provides an environment with many new visual objects to explore. Help them by pointing things out. If something has caught their eye, let them linger and observe. Keep in mind they are still near-sighted, so when possible bring objects in so they can have a closer look. For the most part of the first year, they can only focus on one thing at a time, so there is no need to overload them; one object at a time is plenty

Will turn head to the direction of voices and sounds
Begins to self-feed with small finger foods
Transfer objects from one hand to the other. Able to reach and grab objects
Will enjoy the game of “peek-a-boo.” (Why? At this stage they are yet to grasp the concept of object permanence – knowing something is there, even though they can’t see it. Hence it is amusing when someone’s face appears out of nowhere. This game encourages their understanding)
Visual acuity increases. They will be able to see the finer features of faces and develop facial recognition. This is also when they can develop shyness to strangers; they prefer familiar faces around them

Will begin chewing on objects
May be able to roll all the way around
Sit unsupported
The separation anxiety from parents may begin. Fear towards seeing or hearing strangers
Will respond to their name being called. Up until now, when people spoke, all they could hear were the different tones. But after 7 months, they will start to identify the different words being spoken

Finding the need to explore; scooting and crawling begins
Can go from lying down to sitting without assistance
Might experiment with gravity by dropping toys from high-chair
May use shouting to attract attention, learning to use vocalization as a way of communication
Finer, pincer grip developing to pick up small objects. May show interest in grabbing the feeding spoon

Understands object permanence (peek-a-boo no longer gets the same reaction)
Able to stand when holding onto someone or something
Babbles tunefully, may start to sound out baby words
Will drop toys and then look around to see where they went. Eventually they will watch the whole dropping process and will be intrigued to see what happens to them after they drop

Will develop gestures; begin to clap, able to wave good-bye
Words such as “ma-ma” and “da-da” will be directed to the correct parent
Will hear and understand a few words. Their favourite being “no”. They will begin to grasp the concept of names for objects. This is encouraged when someone can point at an object and say what it is for them. They soon start assigning names to objects they are most interested in. The names are usually a mixture of baby gibberish and what people have sounded out to them

Understands the difference between “yes” and “no” as well as the meaning of small phrases
Can crawl or scoot around efficiently
Able to stand on their own for a few seconds, before plunking back down. May be able to walk with assistance, but may not have the confidence in their muscle strength to do it on their own
May enjoy dancing and moving to the beat. Music is a great way to build up their coordination, motor control and timing. Plus it is something they really enjoy

A need to explore on their own becomes apparent. They have a greater desire to stand and attempts to walk
Most babies begin to walk by 14-15 months. But many can take a little longer and don’t start walking till the 16th or 17th month
Vocabulary increases to a handful of words
Becomes a helper; extends arms and legs when getting dressed, can hold a spoon and starts the progression to self-feeding. Can also hold a pencil and will start scribbling
Will be able to identify them self in the mirror. Enjoys identifying things that they know

Walking becomes the main mode of transport. Towards the end of their second year, they will be able to jump and run
Vocabulary has extended to around 50 words and by 24 months, can string 2-3 word phrases together. They can understand over 200 words and follow simple instructions
By 24 months, localization of sound in all planes and 20/20 vision is developed.

Milestones are used as an indication for the progression of development. Many parents can become overly concerned and fearful when their child takes a little longer to master a skill. It is important to remember that every child is different and the achievement of milestones can differ by months. Some children are just naturally late developers and others are known to skip milestones altogether. It is not uncommon to have children that will never crawl, than all of a sudden, they start walking. Taking an extra month or two to reach milestones means very little and won’t stop them from growing up perfectly normal. For example, if you came across a couple of 5-year olds, born 2 months apart, would you be able to identify which one was two months older? The end milestone result is not the key, but rather the progression and desire to learn and explore is. By all means, they should be encouraged, but it shouldn’t be forced. When they feel the need to grab, throw, walk or talk, they will figure it out. If you see that your child’s desire to learn is not making any progress or that they appear to be lagging significantly behind, you should discuss your concerns to your doctor.